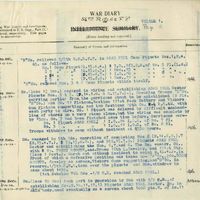 This gallery explores the British campaign the North West Frontier of India during the aftermath of the First World War in an official war diary relating to a tour of duty of the 56 Frontier Force Rifles (2 Bn, 13 Frontier Force Rifles) in Asad Khel and Razmak (Waziristan), 1922-1923.

It includes details on force numbers, casualties and the erection of encampments and fortified positions; more notably recording the movements of the whole battalion from camp to camp along the route; arrivals and departures of various units and supply convoys from a base camp during the creation and garrisoning of permanent piquets on the high ground; incidents of sniping and ambush by Mahsuds; the return of the battalion to a rest camp at Kohat; appendices concerning the strength of the battalion, details of permanent piquets in the Asad Khel sector, statements of casualties, temperature charts, and rough copies of operational orders.

The diary is taken from the papers of Brigadier Arthur Gibson (1894-1986), who was Adjutant with the Rifles at that time and is a fascinating snapshot of the challenges faced by colonial forces in this dangerous region.